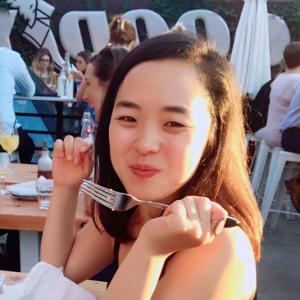 Heejae Jo was born in Seoul, Korea, in 1987. Having an interest in learning how people acquire emotion and their patterns of behavior, she studied Educational Psychology at Sookmyung Women’s University. Attending a women’s school also gave a great impact on her feministic perception. Studying abnormal psychology in university, she has been questioning the boundaries between normal and abnormal. In her art, she likes to experiment with what we believe is normal—tradition, universal value, and rational ways of thinking. She immigrated to Canada in 2015. She earned a Bachelor of Fine Arts from OCAD University. Her identity as an immigrant and an Asian female with her interracial marriage life is a major subject matter in her art. In 2019, she decided to use her last name ‘Jo’, rather than ‘Shin’ which was granted by the male-centric convention. She chose ‘Jo’ from the names of people she loves the most.

I am not quite there

Nine paintings in a rectangle

Gladstone Hotel, Toronto
Why the @#&! Do You Paint?: Go Figure

OCAD University, Toronto
The Festival of The Body

Try-before-you-buy with a 3 month rental. 100% of your rental payments go towards the purchase (interest free). Message the artist directly, and start the conversation.

We make it easy for you to try art with smart payment plans and try-before-you-buy models.

See How It Works

Artwork protection is included on all art rentals up to $5K. Our Customer Care team is always here to help.

1% from every transaction goes towards a Canadian arts nonprofit.